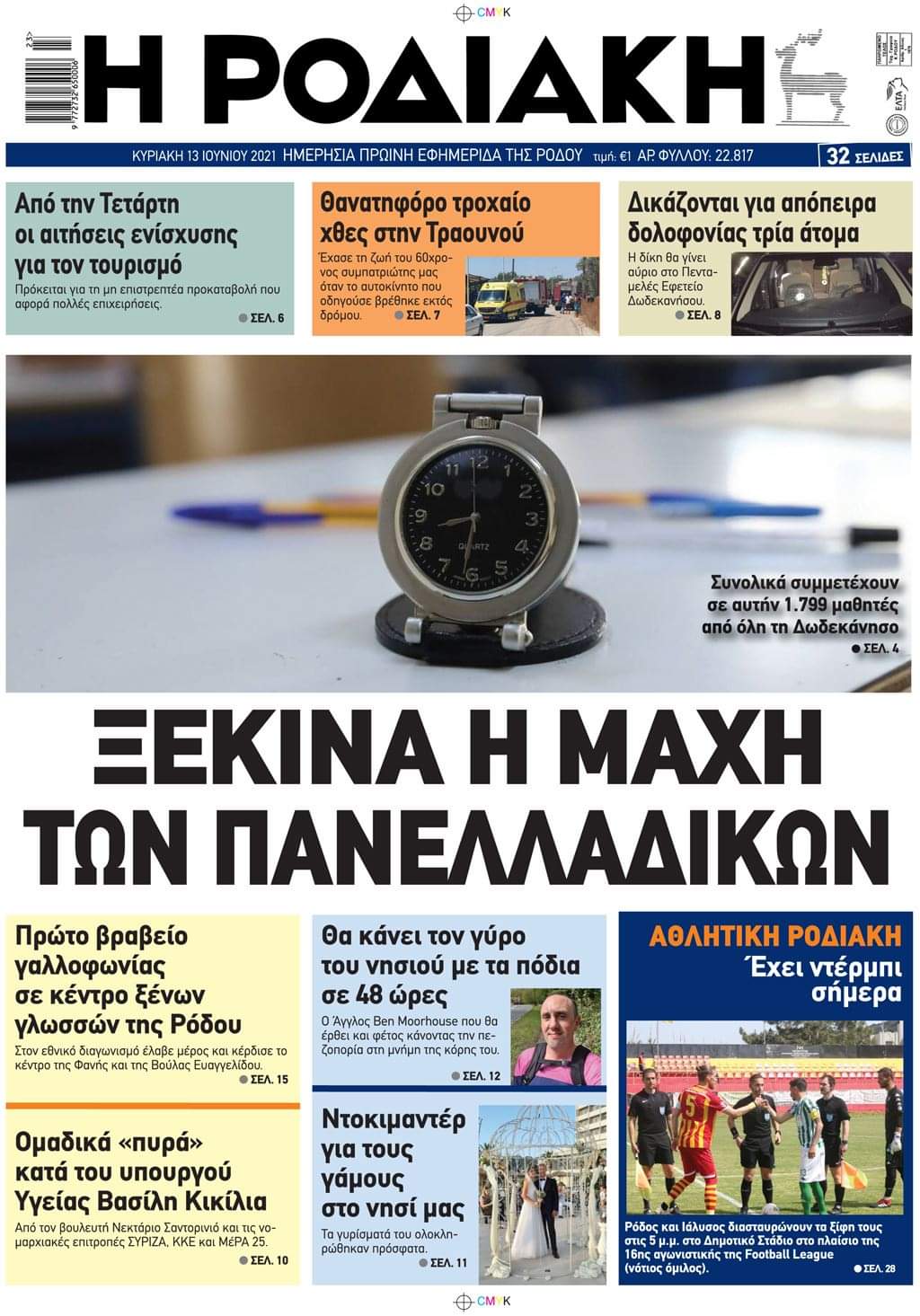 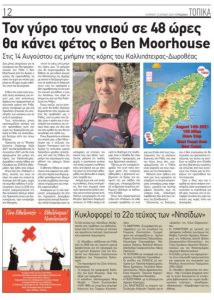 Ben has featured on the front page of Ροδιακή Εφημερίδα ( Rodiaki) for his upcoming Rhodes Extreme Challenge Walk 2021 . Thank you to Rodiaki and our friends in Rhodes for your support!

To view the full article in English visit the website in Google Chrome or see below.

There are two months left for the project that will be carried out in Rhodes by Ben Moorhouse from England, who will try to make the tour of our island within 48 hours without any sleep and rest.

Ben, who is well known to the inhabitants of our island from similar actions that he carries out in recent years in Rhodes, returns this year with a new challenge, asking for the support of the inhabitants in this project as well.

In recent months, he has been preparing hard for this effort in his country, even advertising Rhodes, which he considers his second home, as he states.

This is the “Rhodes Extreme Challenge Walk 2021” which will be held on August 14, 2021 and will be dedicated to the memory of his daughter Kallipateira-Roothea who died in October 2018 two weeks before she was born.

As he tells “Rodiaki”, his goal is to make the tour of the island in less than 48 hours, without sleeping or resting at all, as in 2018 when he also made the same distance but with a stop in Prasonisi where he spent the full day resting, before returning to Mandraki.

“I do this in memory of my daughter. The money raised will be donated to a special clinic in Manchester, England for the purpose of conducting research on children for their rescue, “Ben said recently, adding that his son Apollon was born in this clinic, named after him. the god Apollon of Rhodes.

As he emphasizes, for this event will be given special publicity in England and so Rhodes will be promoted, while all he asks is the love and support of the inhabitants of the island both to him and to his team that will accompany him to his journey.

As the inhabitants of our island remember, Ben Moorhouse and his partner Gaynor Thompson from England in recent years cross long distances on the island of Rhodes in memory of their compatriot rugby player Steve Prescott.

The athlete died of cancer at a young age and in fact a charity has been set up in England which contributes to the information and support campaign for cancer patients.

Regarding the new challenge, he emphasizes that since last December he has been training hard, traveling many kilometers in order to achieve the goal he has set, emphasizing that many times the training was done in bad weather conditions under rain and snow and only the last weeks the weather in his homeland has improved.

But even under these circumstances, as he points out, it does not matter how much he trains but the purpose for which it is done. However, he emphasizes that in Great Britain he constantly advertised Rhodes even during the pandemic when Greece was not a “green” destination for British tourists.

However, on this occasion, he expresses the hope that very soon in the coming weeks the British government will give its approval for travel to our country, emphasizing that British tourists are particularly eager to come to Greece.

As Ben characteristically says in “Rodiaki”, he promotes our island at every opportunity and asks his compatriots to book a vacation in Rhodes, on the island of the sun, as he says, emphasizing that Rhodes is safe and is waiting for them to visit it.

In fact, when they come to our island, he urges them to support the local shops, restaurants, bars, cafes, shops and supermarkets, telling them that there is a whole paradise outside the walls of the hotel!

Closing his statements, Ben points out that he will continue to train, hoping in July that trips to Greece will be opened for British tourists and asking the inhabitants of our island to support his effort in August.